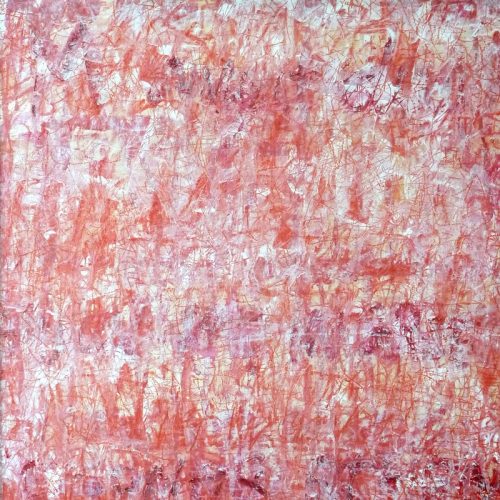 When we go to an exhibition, we enter an intimate sphere. The sphere of art is usually intimate but we are more prepared for that in the case of performing art. We are accustomed to the reassuring fact that there is a picture between the author and the recipient, which mitigates the intimacy. In other words, visual art is more objective by nature than for example the theatre. Even if the artist is in the same space as the spectator, as it is usual at an opening.

But this cycle of pictures by József Gábos is not like that. These works do not keep a distance but, with a confusing power and passion, entangle us in a – for us unknown – story. And because we do not know it, we immediately try to imagine it and put ourselves into the story which, by doing so, becomes ours. The contrasting visual impressions reflect our experienced, intimated or even concealed sentiments. And suddenly we realize that we are standing before a never seen, nevertheless familiar picture, in the middle of our intimate sphere, surrounded by our fulfilled and suppressed desires, loves and deceptions.

One feature of art is that it can create. It can produce things which never existed before. It is also true for this exhibition but the essence of the here exhibited works is not manifesting the new but just the contrary covering up the past. They try the impossible as genuine artworks are expected to do. Precisely by trying to undo what has been irrevocably done. They want to heal.

I said covering up and not keeping back. The outspokenness in this art cannot be avoided. Covering up does not mean hiding, distortion or blurring but making it bearable. And the action can only be authentic if it uses ethical means, the means of art. 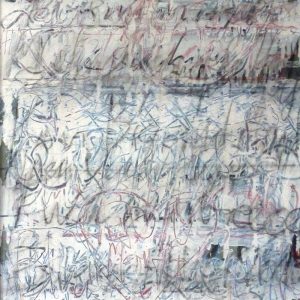 We are standing in front of works with multiple layers where the first or bottom layer presents the experience. Without knowing exactly what happened, and it is not our business anyway, the experience used as a starting point or inspiration is evidently a strong and overwhelming one and the reaction triggered by it is helpless fury and despair. The language for it is swearing. The visual vocabulary of swearing consists of unmannered, almost uncontrolled expressive gestures: words, fragments of sentences and icons which recall the world of graffiti. Last but not least a colour palette restricted to red and white.

But the expressed anger remains in the air, in our case in the picture and swallows everything around itself. It does not bring absolution, it only calls it to mind, it is the pain itself. And what is equally important is that a mere outspokenness is a necessary but not sufficient condition for an artwork. You must work on it to make it a picture. New layers must be applied. You must overwrite if possible.

The time, material and motives for trials of overwriting cannot be estimated in advance. It can take weeks, months or years, and usually does. Sometimes one or two layers can be enough but sometimes even seven are too few. However, all ethical means can be used: overpainting, splashing, pouring, overpasting, drawing in, scribbling, carousing, soaking and who knows what other practices – the techniques of painting. 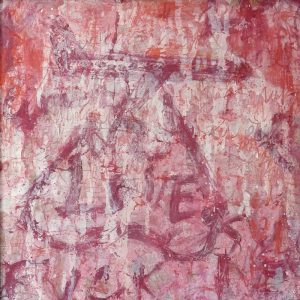 Sometimes the basic layer is so relentless that even the endlessly repeated trials cannot crack it. Those pictures are not here: this is not their place. Maybe they can be continued but it is more possible that they remain what they originally were: swearing uttered with brush. In those pictures which found their place in this collection something had been transformed. Maybe that is what is called catharsis…

These pictures do not deny their origin but do not brag either. They do not try to explain themselves or extort sympathy. They are passionate but do not behave affectedly. They are not present as storytellers but by their own right, because they are original, authentic, intuitive and ready: artworks unalterably.

The message of the show is optimistic. The pieces of the closing cycle allow the hope that tabula rasa may be possible. All the chalk marks, drawings and scribbles can be almost completely wiped off the board. Almost completely.